03.05.2022 - The NCSC received about the same number of reports last week as the week before. The investigation of attempted extortion with data from a hacked smartphone revealed that the cyberincident could be traced back to leaked login credentials. The leak in question occurred two years earlier at an alternative app store.

Last week, the NCSC was notified of a case where a smartphone was completely taken over by hackers, who gained access to the contacts, bank details and, of course, private photos. They then used this information to try to blackmail the owner of the phone.

During the analysis, the NCSC discovered that the login credentials of the person who reported the case had been leaked. As a matter of fact, when the email address was checked, it turned out that the data had been leaked on the internet during a major data leak from the alternative app store Aptoide. 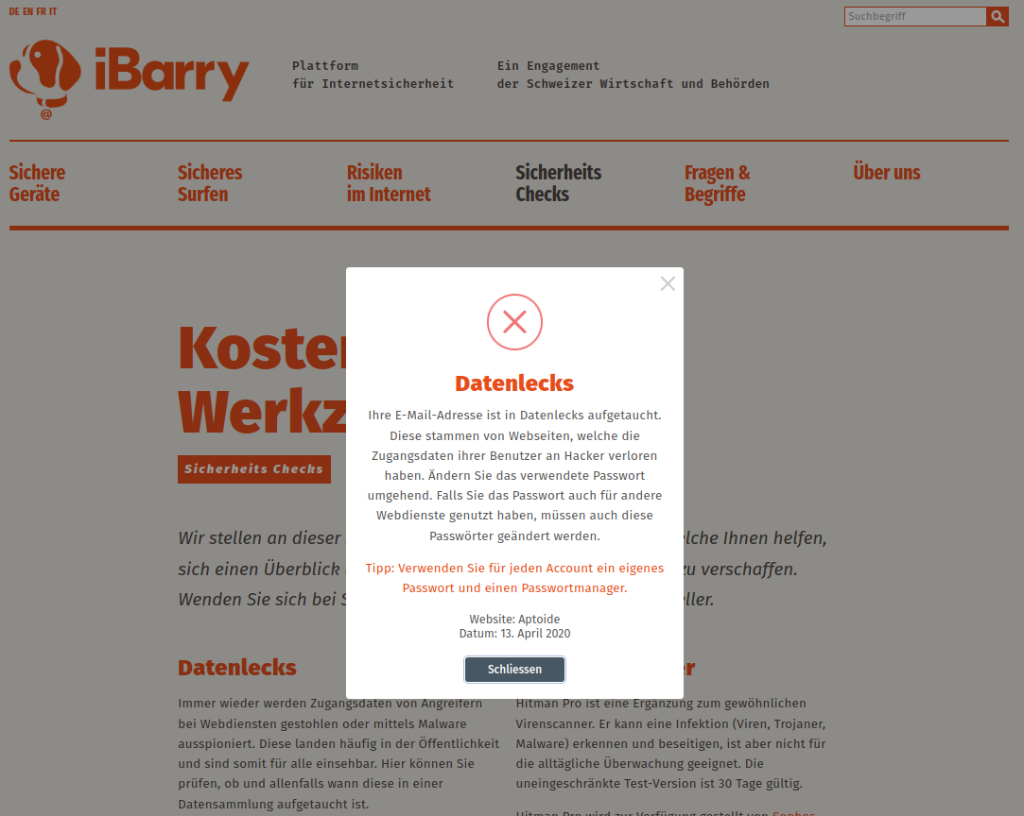 The iBarry website makes it possible to check an email address for known data leaks; here with the reference to the Aptoide data leak.

Aside from the app stores that are preinstalled on mobile phones by phone manufacturers (e.g. Google Play, Apple's App Store), other stores that offer apps also exist. These are called alternative or third-party app stores. While the official app store providers carry out in-depth checks on the apps, this is not the case with some alternative stores, or only to a limited extent. In addition, registration data stored there is particularly vulnerable, as it refers directly to the smartphones that have apps from the stores installed.

In the attack on the Aptoide app store, not only email addresses and user names were lost, but also passwords, IP addresses and information on the browser used. Since the passwords were not sufficiently protected, they can be reconstructed and used for attacks.

The website of the Android alternative app store that was hacked in 2020 with the download button for installation.

When alternative app stores are used, access to areas of the operating system that are normally blocked is enabled. In particular, the use of directly installable software (APK format, Android Application Package) which was not downloaded via an app store often results in a smartphone becoming infected. Those who use such methods should know exactly the risk to which they are exposing themselves and should thus trust the source. But apps from popular alternative app stores can also violate the rights granted to them without verification, e.g. in order to steal information.

Smartphones that have such software installed should never be used to conduct banking transactions or to store information that is intended solely for the user, e.g. passwords.

Recommendations on what to do: