31.05.2022 - The number of reports received by the NCSC remained high last week. This was once again due to threatening emails allegedly from the police. Italian versions of these were also reported at the weekend. In addition, the NCSC received reports concerning various cases of investment fraud, some of which involved substantial losses. In most cases, a little research would have quickly revealed the fraud.

In recent weeks, there have been growing number of reports concerning investment fraud with significant losses. Six-figure sums are not uncommon. In times of rising inflation and low interest rates, such investment offers seem to be booming. Blinded by the high returns promised, the victims ignore all signs and indications of fraud. In most cases, a little research would have revealed the scam.

High returns in a short amount of time

Particular caution is required if a financial service provider is not authorised by FINMA. Moreover, it is generally worth noting that promises of large profits within a short period of time (and with no effort) should typically be considered too good to be true. Some scammers outdo themselves with promises of triple-digit percentage returns and profits.

Promises of a 300% return on investment in 12 months

The domain's registration date is also an important indicator of a fraudulent website. This so-called Whois information can be retrieved from various internet service providers. For ".ch" domains, the registration date can be found at https://www.nic.ch; examples of where it can be found for international domain names include https://whois.domaintools.com/ and https://centralops.net/co/.

In contrast, the domain for this investment website was created only 80 days ago. On the left, the information was retrieved via the Whois service provider Centralops (https://centralops.net/co/) and on the right, via the service provider Domaintools https://whois.domaintools.com/. 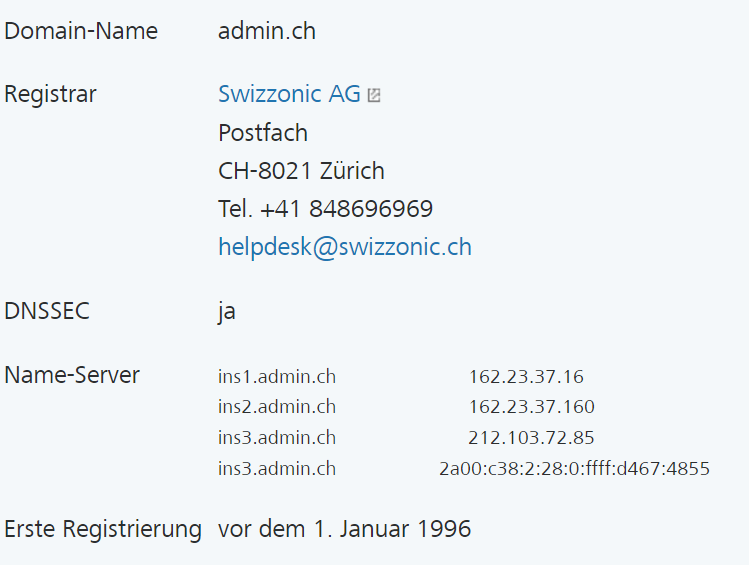 It can be seen on nic.ch that the website "admin.ch" was registered as early as 1996.

In most of the reported cases, the dubious investment websites are only a few months old. Would you really entrust your money for high-risk investments to a financial institution that has been in business for just two months?

Fraudsters also like to use well-known addresses in Switzerland. For example, the NCSC recently received a tip about an alleged investment firm at Paradeplatz 8 in Zurich. However, the firm indicated cannot be found there, as it is the headquarters of Credit Suisse. In addition, a Swiss telephone number is often given. However, a Swiss number does not mean that the company is actually in Switzerland. In these cases, the numbers are rented and the calls are forwarded abroad. (See also the cybermyth on telephone numbers)

Some of these websites even provide advance warning of losses. For example, the terms and conditions state that cryptocurrencies are subject to particularly high price fluctuations and investors can therefore suffer considerable losses in a very short period of time. In this way, the fraudsters build up their story at the very beginning of the fraud in order to explain the disappearance of money – into their own pockets – later on with the help of price fluctuations. Moreover, this makes it difficult to prove the fraud in the first place.