Promotional campaign ostensibly by the founder of the cryptocurrency Cardano

Early last week, a live stream video on YouTube enticed people with an alleged promotional campaign for Cardano, a blockchain-based cryptocurrency project. Cardano founder Charles Hoskinson can also be seen in the stream. The offer sounded tempting: if money was paid into a specific cryptowallet address, double the amount would be paid back. However, the amount paid had to be between 2,500 and 800,000 Cardano coins. At the current price of CHF 2.27, this means that sums of up to CHF 1.8 million were supposed to be paid in and then doubled. The website that provided more extensive information put additional pressure on the visitor by displaying a counter showing how much money was still available for the promotion. But this counted down in giant steps towards zero.

It is obvious that such an offer cannot be legitimate. This type of scam is not new. Such so-called "give-away" campaigns have been around for some time now and are additionally observed in connection with other made-up stories. For example, there is also a version with Elon Musk which likewise promises that amounts paid in will be doubled. Cardano founder Charles Hoskinson has also spoken out and distanced himself from such videos. The speech in the video was taken from a keynote presentation at a conference and was taken out of context.

Such videos regularly do the rounds. In one case, a YouTube channel with over 500,000 followers was also hacked apparently and the alleged story about the supposed advertising campaign was spread on it. The account is no longer accessible.

Last week, the NCSC received a growing number of reports concerning Telegram and Instagram accounts offering official vaccination passports and vaccination certificates for sale. Cybercrimepolice.ch also warned about these offers last week and provided information via various groups and channels on the messaging service Telegram, which allegedly offered "real" vaccination booklets as well as "real" COVID-19 certificates. It is promised that the product will be delivered after paying CHF/EUR 100 to 125 in the form of bitcoins. However, the money paid goes to a bitcoin address of the fraudster and the goods are never delivered.

Do not respond to such offers and do not transfer any bitcoins to the advertiser.

When victims of advance fee fraud are illuminated

Emails about advance fee fraud are the most frequently reported to the NCSC. In such cases, the victim is promised a large sum of money. If the recipient responds to such a message, some reason is given to request an advance payment, e.g. fees, legal costs or profit tax. The stories used by the fraudsters are always the same. They usually concern a large inheritance. A supposed lawyer pretends that there are no living relatives and that the recipient has been chosen to receive the entire inheritance. The same scenario exists with purported lottery winnings. Here, too, the recipients are promised a large sum of money even though they never actively participated in a lottery. 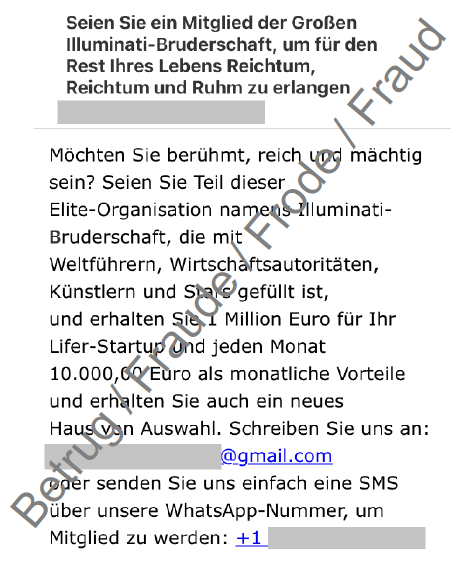 Advance fee fraud email in the name of the Illuminati Brotherhood

A more unusual story was recently reported to the NCSC, with the recipient being offered membership of the Illuminati Brotherhood. Those who join the brotherhood would receive not only a welcome gift of CHF 1,000,000, but also monthly payments of CHF 10,000. Anyone interested is supposed to contact a Gmail address. Even if the story is a little bit more elaborate, it is ultimately just a normal advance fee scam.
Be sceptical if you receive emails that require action on your part and that carry a threat of consequences (loss of money, criminal charges or criminal proceedings, blocking of an account or card, missed chance, misfortune) if you do not do what is required. 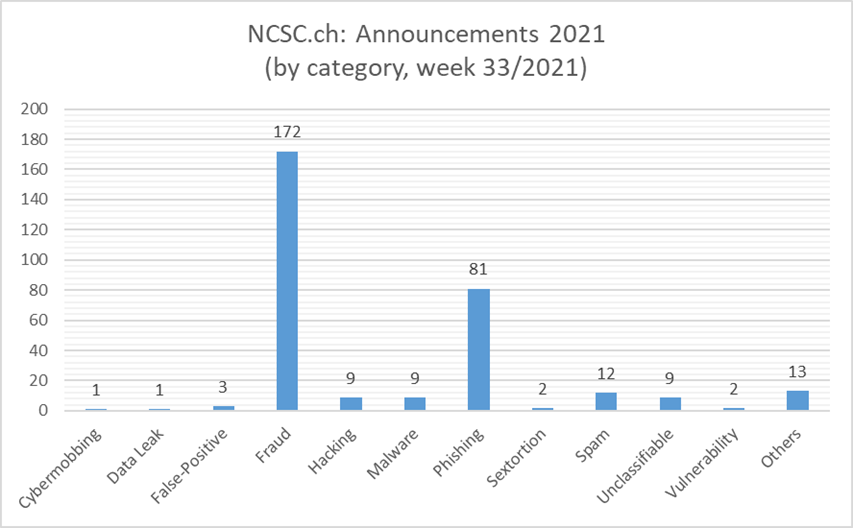